The BBC’s Gilles Peterson called her ‘the Grace Jones of jazz’, and the quality of her voice and emotional intensity has been variously likened to Billie Holiday, Gladys Knight, Chaka Khan, Tina Turner, Amy Winehouse, and Cassandra Wilson. She started recording at the age of five, and describes these influences as ‘feeding my soul’, and being ‘collectively ingrained’. Plaudits like ‘a vital new vocal talent to the world’ set the bar very high, so Stormy Monday’s Garth Sundberg Zoomed vocalist Lady Blackbird, aka Marley Monroe, in LA to check out the hype, and quiz her about her debut fusion album Black Acid Soul.

The album surprised me in that it doesn’t sound like it has any sort of timestamp. With that sort of spare restrained production, it really could be part of anytime, or no time in particular. Is this the line you were going for?

Anything that I work on or release, my hopes are always to make a classic, timeless piece. So that’s one of the best compliments to hear, you always wanna make that timeless piece and you know with this album, it really was about just tearing everything down and starting with my voice and building up from there… So this album is just the body of vulnerable, raw, truth…

You’ve gone down a fairly divergent path with some of this material. Was this always going to be the end result?

I think all of those paths, all of those different genres… trying my hand at this and trying my hand at that…you’re trying to crack the code I always say. And that’s part of your journey, those moments, experiences and music – they are all a part of you, so it’s definitely built and shaped. You’re working hard to try to accomplish something and to share your soul… all of those experiences have shaped what I am and who I am, and this project fused it all together…

It really does have the feeling of collaboration with Chris Seefried. Was that something that just happened fortuitously?

I’ve been working with Chris for a long time, and we’ve been writing different styles of music and sounds… We’ve recorded a lot to narrow down exactly what it was that we were looking for, and we’ve always worked together so wonderfully, and we listen to each other, you know?

It sounds like you do a lot of listening because there’s a tonal and textural consistency to the record, but in terms of the material, the interpretations cast a very broad net. As a longtime James Gang fan, raised on Joe Walsh, I never expected to hear Collage…How did that come about?

We went through so many songs, a lot of which I had never heard of… the amount of time put in to try to narrow it down… to know when I could put a spin on… my take, what I really thought I could reinterpret properly… but I hadn’t heard Collage before.

At the other end of the spectrum, were you concerned about what comparisons might be drawn covering such a significant Nina Simone song as Blackbird?

Someone like that, such greatness… the contributions she’s brought… how do you mess with something like that? I loved that song for so long, and I always said I wanted to do something with it. I performed it once, but it just didn’t have the right feel – it wasn’t the right time or the right place. But it was one of the first we worked with on the project – the vocal was only a demo when I brought Chris that song. Turned out to be the vocal on the album but he loved it, and everything just started building from there.

So that vocal is the original demo?

Yeah, and then when we took it to Sunset Sound, the band played around that, because that whole process of just recording live was very new…. The Blackbird vocal was recorded at Christmas Studios as a demo and then at Sunset. Then the band built and played around my vocal.

The interplay between the musicians and your singing is pretty evident across the record which is great to hear.

They’re magical, they are amazing! That was all that Chris’ doing. He brought them all together… and yeah, phenomenal job. I love those fellows.

That comes across in the record. You can tell when people aren’t stepping on each other…

Yeah, and giving room to breathe….

One track that sticks out on the album is Beware the Stranger — that seems a bit different thematically from the other tracks, sounds more like contemporary soul. Is that a signpost to where we’re going in the future?

In terms of what the next album might sound like? We did so much writing through the pandemic, so Album Two is already in great shape… there’s definitely a similar thread. Wanted Dead or Alive is another one that I wasn’t too familiar with. We slowed down the tempo, we changed the title, we changed the gender. It started with that quiet piece at the end, and we just thought it sounded so cool, we just started building on that. And then it all just started feeling right… 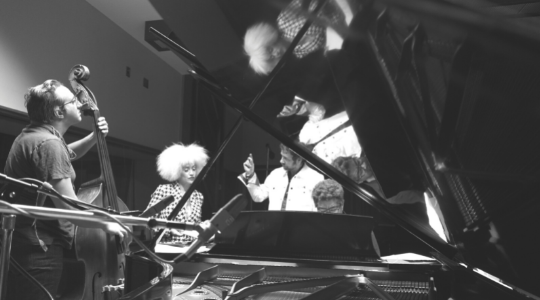 So there really wasn’t any thematic concept behind the record other than if it feels good, it’s good enough?

Yeah… we went in just being honest and baring it all really. The only thing is the feeI, because that’s what we did when we were listening to so many songs for hours to find what felt right. I know it when I feel it, I do, I do.

That was completely unfortunate… The album was complete at the end of 2019. It was already in the making and was definitely not intentional.

What do you see as part of your work going forward?

Ultimately, I’m just here to entertain you. There are always going to be deep moments and topics… that’s reality, but also the fun and the entertaining side as well.

Are you comfortable with the label of jazz? Or would you rather have it be just ‘vocal performance’, and not necessarily subject to categories?

So can we expect you to come to Blues Fest in Australia one year?

Well, we’ll try! We were booked for all of these festivals in London…  played a couple of festivals there and a club and we were scheduled to be in the Netherlands, Berlin and Paris, but were cancelled unfortunately… but I can’t wait to get down there!